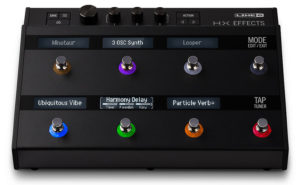 This is an amazing multiFX device, based on the Helix devices, but without the amp modelling. Many players like to use their amp for “tone”, so this is an ideal and highly compact solution. featuring an unbelievable selection of classic and modern effects, with many parameters than can very easily be assigned to one of two expression pedals. It has up to 8 FX “blocks” with 6 of them switchable by footswitch. It uses a highly intuitive system with loads of “preset” pages, each of which can have 4 “snapshots, where the chosen effects for that preset are stored on or off and parameter changes are remembered. I picked mine up for £358, so shop around, some places have it at £420!

One of these blocks is a looper (you can only have 1 instance, sadly!) Whilst the loop stops dead, you can place the looper block before a reverb or delay (both with “tails”) to provide a degree of “fade out”. You have two looper options

1 Switch looper
Pretty much equivalent to the Ditto and countless other simple loopers. This takes up one footswitch on the unit.

The same as the looper on the M9/13 series.Max. Loop Length (Full Speed) Mono 60 seconds Stereo 30 seconds. Press the Looper switch to open up 6 options

Switch 4 (bottom left) – Press to start recording a loop. Press again to overdub additional parts. Step on again to start playback in overdub mode. You can end & play the loop by pressing “play” or “play once” (which does what it says on the tin). You don’t erase loops, you just press “record” again.
Switch 5 – alternates between play & stop
Switch 6 – plays the loop once
Switch 1 (top left) – undo and redo the last overdub
Switch 2 – switching to 1/2 speed will drop the loop down one octave. Recording at 1/2 speed will double your looping memory and switching to full speed will cause the loop to play at double speed (up an octave).
Switch 3 – Step on REV/FWD to hear your loop backwards.

I find the double click to stop unhelpful in live performance, so I’ve built a simple midi pedal to provide an instant “stop” via midi. It also includes a “play” button and can be expanded to control all aspects of the looper.

Midi control (via USB or a midi in socket) is almost complete, lacking only a “clear loop” option, though I’ve suggested to them it could easily be included in a future firmware update. The CC messages required are: