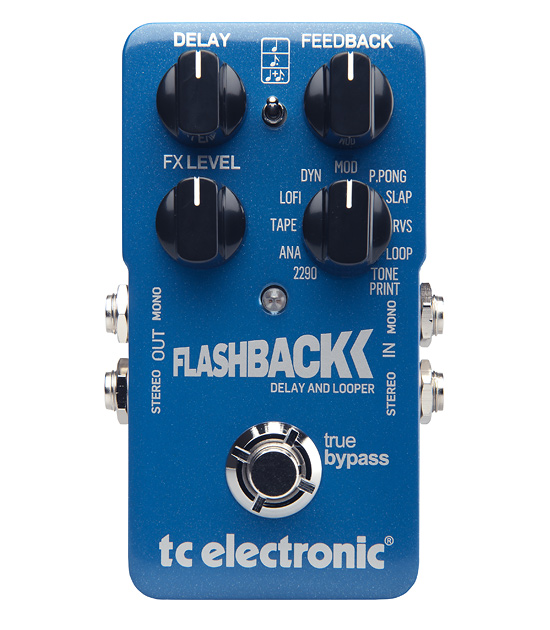 For someone just wanting to give looping a try this is an ideal unit at a very reasonable price. As an echo pedal with 6 seconds of delay it’s already usable for some forms of looping, just dial in a longish delay time, a bit of decay, and start adding a few sounds into the loop.

Of course, main interest is the actual loop setting. This only has one switch (the main one) to control it, so don’t expect many features. Press to start recording, press to end recording and start looping. After that the switch takes you in and out of overdub. Apart from that, the only other function is that a double tap stops and erases your loop.

Even when you’re overdubbing there’s no way to control feedback while looping, so for an evolving loop you’re going to have to go back to the echo modes. There’s little excuse for this omission really, the feedback knob is still physically there…so minus points to T.C. for this.

On the positive side, sound quality is excellent and there’s also one additional feature that makes this pedal attractive. T.C. had the generousity to add a “dry mute” function to the pedal, which means that it can easily be used in a larger looping setup, for instance on the Aux send of a mixer for adding an additional loop.

As an echo/delay pedal the Flashback has plenty going for it, with full compliment of delay settings and no reports of “tone suck”. Only downside is the method of setting the tap time, which involves holding down the main switch and hitting the (now muted) guitar strings in time to the beat…awkward and hardly seamless in performance. There’s also the “Toneprint” facility where you can download echo settings made by “your guitar hero’s”, …er…totally naff, sorry, that’s just my opinion…but yeaauuch! It’s unclear to what extent it’s possible to get sounds via the Toneprint system that aren’t possible with the regular settings, but in theory T.C. could make software available to allow users to do the customisations themselves, now that actually would be cool.

UPDATE 1T.C. Electronic have now released the editing software which lets you create your own ‘toneprint’. Apparently there’s plenty to tweak.

UPDATE 2 A couple of downsides. The switch is very stiff and requires a lot of pressure to click it, I’ve checked a couple of pedals and both were exactly the same. This isn’t going to help with getting accurately timed loops.
The FX volume also turns down the dry signal in loop mode. This renders the ‘loop volume’ control useless. As the most basic of loopers tend to lack that feature anyway it’s not a big deal (just leave it full up), but what a stupid mistake!

Overall, a nice little unit, good for anyone looking for a delay box and curious to try a bit of looping.