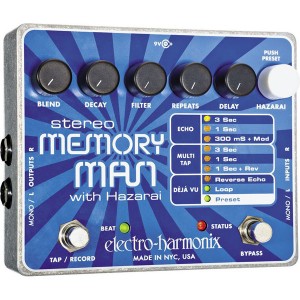 1. Feature set & place in the market

The recent time has seen some growth in the field of looping devices in general, but of stomp boxes in the comparably lower price range especially. While earlier in the stompbox format there have only been delay pedals which could also be used as loopers (and with the for the time huge amount of delay time, the Digitech PDS8000 stands out), recently there have been both delay pedals with a looper thrown in (this trend was started by the Akai Headrush and the Line6 DL4 – don’t know which came first) and dedicated loopers, among them both Boss’ RC series and the Digitech Jamman. Lately, even Eventide with its Timefactor has joined that market – with the Eventide-typical price tag.

As a sidenote, I will not compare it to the vintage Digitech PDS (no longer available), the Eventide (about double the price, and I don’t know or have it), nor to the Digitech Jamman or Boss RC series, as they are of a different concept (pure loopers).

The SMM is, as I mentioned, a delay with a looper thrown in. It offers seven different delay modes and a looper in addition to it (which you can record to and play back in six modes, it only plays back in the MultiTap+Rev mode due to UI restrictions). The maximum delay time is 3 seconds (but with an additional 6 seconds reverse echo in MultiTap+Rev) and 30s of loop time (at standard playback rate).

Package-wise, the SMM comes in a sturdy metal box (smaller than a Boss DD20) with two metal footswitches (DL4-style) and five knobs on top. There are a few LEDs (active, tempo and mode). No connection of an external footswitch or expression pedal.
Connections are 2xinput on the right and 2xoutput on the left. While this may seem nice to the typical stompbox people, it doesn’t look nice for me because it makes arrangement on the pedalboard more inefficient from my POV (I prefer connections on the rear).
The SMM comes with an AC transformer power supply and won’t run off batteries (why?)

Everything here is stereo, the sample rate is some 46.88 kHz with 24 bits of conversion and 32 bits of processing.

As mentioned, the looper is available in addition to the delay modes. More specifically:
* a recorded loop can play back in addition to you playing with a delay added
* you can record a loop in all modes (except Multitap+Rev) – which will record your playing plus the delay used

The two footswitches:
Tap/Record: with that, you tap tempo and by holding it down, record or overdub a loop. There is a debounce period of 0.5s to distinguish between tap and record – hence, no loops or overdubs which are shorter than 0.5s.

Bypass: this esentially switches off the device (delay and a possibly running loop). Delays will not continue to trail out. Consequently, there is no possibility to play on top of a delay without adding to it.

The five knobs:
Hazari: switches the mode
Delay: delay time for the delays, playback speed for the loop (Yes! you get continuous control from halfspeed up to doublespeed!)
Repeats: number of taps in multitap modes, feedback in delay modes, feedback during overdub in looper mode (for thos EDP people: “secondary feedback”)
Filter: turning it to the left adds a lowpass, turning it to the right a highpass
Decay: dependant on mode – will discuss this in section 4
Blend: dry/wet ratio. This will for some reason affect both the currently selected delay and a possibly playing loop

You can save one preset for each of the eight modes to store your favourite knob positions.

a) LOOP:
I’ll start with that one…ok, holding down tap/record gets you recording, holding tap/record afterwards gets you into overdubbing. To erase the loop, switch to bypass and hold tap/record for half a second.
Now what can you do with your loop?
Decay: turning it all the way CCW sets reverse playback – turning it all the way CW sets forward playback. The problem here is that really quick transport direction changes are hard to do.
Repeats: Yes, you get control of the feedback level during overdub (and I think this is a first one for a looper in that package/price range).
Delay: this is the loop speed from half time to double time. And this is for me the most outstanding feature of this looper in comparison to competitors. True varispeed without any artifacts!
Tap Tempo: somehow, the thing decides on a tempo based on the loop length and flashes the LED accordingly. By then tapping a new tempo, you can change the tempo of your loop. What’s interesting is that this will do some low-quality time-stretch, not a varispeed. So you really do have both timestretch and varispeed available.

You can’t in any way stop or restart the loop, so it’s more like a delay with different controls here…

(Correction: While this isn’t documented, when you switch to bypass and back on again, the loop is restarted from the beginning. So this gives you some kind of stop/restart functionality, and if your feet are really fast, even a stutter)

b) ECHO 3s/ECHO 1s:
A simple 1s or 3s echo. Why we need separate modes here is beyond me.
Decay: this offers some reverb-like diffusion for your echoes.
As in all delay modes, turning the delay knob will NOT give you the wonderful varispeed effect (why not?), instead it will either shorten/lengthen the loop or at a certain point of lengthening/shortening it just clear it. Disappointing. Not even ugly artifacts as with the DD20.

c) ECHO 300ms+Mod:
You guessed it – a modulated delay. What is funny is that it modulates the delay time phase-reversed for left and right channel. You only get one control for that effect (Decay) to control depth, frequency seems to be 1/delay time, maximum depth is not enough for my taste.

d) MULTITAP 3s/MULTITAP 1s:
Again, two modes for one effect.
Here, “Repeats” does adjust the number of repeats from 1 to 30 (but the maximum number is also a function of the used delay time, so don’t expect a 30-tap 3s-per-tap delay). “Decay” adjusts the volume change for succesive repeats (from rising to falling).

e) MULTITAP 1s+REV:
A tricky creation: Same as the Multitap 1s mode, only when you hold down the tap footswitch, a reverse playback of what you just played is started (in addition to the multitap) for up to 6s! This is perhaps the most (and easiest) controllable reverse playback effect ever.

f) REVERSE ECHO:
This is somewhat tricky – according to the manual, it “is an intelligent reverse echo; it studies your playing so that it can produce reverse echoes that best suit your delay time setting”. In other words, it has some kind of threshold setting which will trigger the reverse delay.
However, there’s more to it – with the decay knob, you can set the “number of replay voices from 1 to 25”. With radical settings of repeats and decay, it quickly gets into weird country. Like e), this is something what sets the SMM apart from other devices.

5. Playing with it / comparing with competitors

To start this chapter, note that from the stompbox loopers, I’m familiar with the E1 Headrush (owned one), the DL4 and the DD20 (have both).

Right now (and at first sight, have played with the thing for less than two hours), the delay modes just don’t do it for me. With the (possible) exception of MULTITAP 1s+REV, there’s nothing that original here that really is new and has a good use case for me.
I’m also disappointed that I can’t let the echoes trail away while in bypass.

There is however one thing that it does which nothing else does, and that’s the varispeed option in looper mode. Up to now, the only thing that could do that (that I know of) with a loop time of 30s was the Repeater. This feature alone might make the SMM the small stompbox looper for all those tapedelay fans.

Direct comparison with the E2, DD20 and DL4:

Sooo, is it worth it?

I’m still not sure (and I guess the following days will show). What had convinced me from the ads was the varispeed looper alone. Then again, as I already have two stompbox loopers (plus the KP3 with some varispeed capability as well), and can do varispeed with the Repeater should I really need it, I ask myself whether I really need yet another looper for that function alone.
Unfortunately, the SMM does not synthesize every available looper stompbox into one device, rather it adds new features that one wants to have…anyone willing to design a stompbox which includes the best of the DD20 (long delays and two of them), SMM (long loop time, varispeed looping) and DL4 (expression pedal, four footswitches, interesting delay models with varispeed)?

Post Scriptum: After playing some more with it, I found that indeed you can produce strange artifacts with the delay time knob (although this works best when turning from short to long time – otherwise, there’s the risk of ending up with an empty delay line).