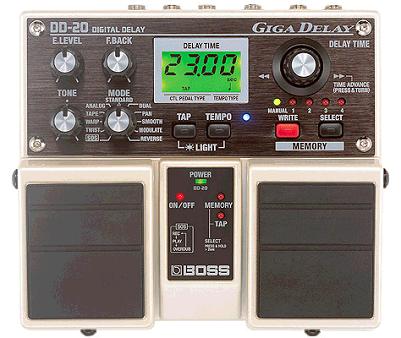 The Boss DD-20 GigaDelay is a dual-stompbox delay device featuring 23 seconds of delay time in 11 different delay modes. (Actually, you can sneak 46 seconds out of it – scroll down to the description of Pan mode for more.) Inputs and outputs are 1/4″ phone jacks, with two inputs for mono or stereo in, two assignable outputs (more on the assigns in a bit), a stereo headphone jack, and an assignable external control pedal jack (again, more on this in a bit). The DD-20 is controlled with two footpedals (On/Off and Memory/Tap), five rotary knobs (Mode, Delay Time, Effect Level, Feedback, and Tone), and four multi-function buttons. The DD-20 can run on six AA batteries for up to 11 hours.

Reviews of the DD-20 on Harmony central can be found at this link:
http://www.harmony-central.com/Effects/Data/Boss/DD_20-01.html

The Boss DD-20 is ruggedly built, fairly easy to learn to use (despite a thoroughly vague user’s manual, typical of Boss/Roland products), and very versatile for its price. Other loop/delay options at or near the price of the DD-20 include the Akai Headrush (which has only a couple of modes, no digital readout, a loud stomp switch, and far less input headroom), the Line 6 DL-4 (which focuses on modeling classic short delays, and has less flexibility in its one long delay mode), and the Boss RC-20 Loop Station (which focuses on looping and audio memory rather than delay with adjustable feedback levels).

I purchased two DD-20s in February of 2005, and have been using them for about four months now. Prior to this, I’ve owned a Bob Sellon-modded Lexicon PCM-42, an Akai Headrush, an (original issue) Electro-Harmonix 16-second delay, and numerous short-length delays. The DD-20 is ideal for loopers seeking long delays, stereo output, and accurate and easily set loop/delay lengths. It is not a good choice for those seeking insert and dropout edits, sonic mangling, pitch-shifting, time-shifting, low-grade digital/analog artifacts, etc.

Some of the features that make the DD-20 a unique and powerful looper at this price point are:

There are several functions on the DD-20 that can be set by the user:

Descriptions of the 11 Delay Modes, along with some tips and tricks for using them:

Glitching
Of some interest to glitch-seeking sonic manglers: if you adjust the Delay Time knob while the effect is taking place and no sound is present at the moment you turn the knob, the length of delay will change, but no audio artifact will be generated. However, if you adjust the Delay Time while a sound is being regenerated, a bubbly, wobbling glitch is introduced. The volume of the glitch will be roughly equivalent to the volume of the signal at that moment. It’s rather pleasant and can be integrated into a loop well.

Time
Although the DD-20 has no MIDI clock in, the time clock of the DD-20 is extremely accurate and stable. I have set two DD-20s to the same delay time and they remain in sync for as long as I have cared to listen – 30 minutes or more.

The one really neat trick of the DD-20 is it’s ability to set up one delay in a preset bank (say, one second at 80% feedback) and another (at, say, sixteen seconds with 100% feedback). If you start playing on the first delay, setting up a rhythmic figure with a one beat-per-second pace, then step/switch to the next bank with the longer delay (we’re still talking about just one DD-20 mind you) the shorter delay KEEPS repeating what was last played into it just as long as the feedback will allow it to go. This shorter delay can act as a rhythmic guide to set up a sixteen beat (4/4, four-bar) phrase in the second longer delay. Get it? Plus, you don’t have to stick with even numbers. You can do it in fives or threes or sevens — you just have to do the math and hope that the rather limited digital readout will do enough decimals. [If it’s not obvious by now, you can also create two completely asynchronous loops atop each other, and by using the Pan mode or the Tape mode in it’s dual head configuration, you can create two pairs of delays, in or out of sync -dB, coyote]

The DD-20 has five memory banks/slots that you can store delay settings to and step/switch through in series. This is pretty darn cool if you ask me. It will also do tap-tempo stuff if you don’t want to play to a numerically preset delay time. It’s just a little harder to make it all work with multiple pedals if you do though. Another caveat: the manual was a little hard for me to figure out at first. I had no end of grief trying to figure it out.

On Using Two DD-20s
Considering the cost, two DD-20s will get you as much or more signal processing possibilities than most $1,000-plus delays. Ted’s multiple memory settings based on a common time parameter works as well with two DD-20s as it does with one – as mentioned earlier, the clocks in these babies are extremely stable, and I’ve had the two running side by side in sync for the better part of an hour at times. I’ve worked extensively with sending a stereo signal into the two pedals, allowing each pedal to do it’s thing on the signal it receives. I’ve also wired them up with the output #1 of pedal A into input #2 of pedal B, and output #1 of pedal B into input #2 of pedal A, effectively creating a cross-feedback that can be controlled with the effect level, tone, and feedback controls. Seekers of dense swirling soundscapes can use this wiring with the two pedals slightly out of synch – say, 40 to 80 ms apart – and create, with just a few swelling notes, a kind of watercolor-on-paper-towel spread of sound. Set the pedals to rhythmically complementary settings, and a few well-placed notes will develop into a pulse that would scare a cardiologist.

(reposted from the Loopers Delight site with the authors permission)