Still available today, the DL4 was a great introduction to creative live looping for a great many people. The fact that it’s 1/4 jack input can work not only with instruments but also with a dynamic mic made it popular with vocal loopers. 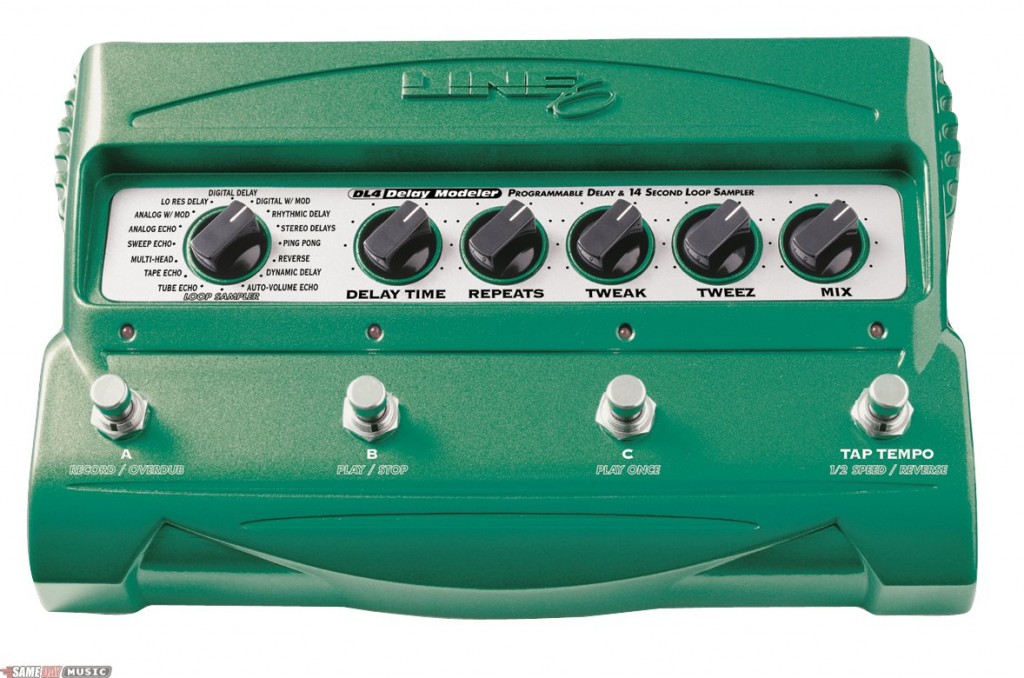 With it’s 4 footswitches and 14s of mono looptime the DL4 offers just enough options to make it interesting, and a simplicity that is a benchmark for any looping device.

When you’re Overdubbing feedback is set to constant 96%, just enough decay to help you avoid overload distortion as you build up the layers. With a short loop it’s just about possible to keep on adding to an evolving loop in a continuous performance, but essentially the lack of a feedback control is the biggest downside of the unit.

The stereo “modelled” delays are of course a selling point, although I don’t think owners of the original devices which were copied would be 100% convinced. The delays sound good however, even if they are plainly digital, and when line 6 give up emulating and produce something new the results are pretty good: the filtered echo is particularly impressive. There’s no true varispeed here, but changing the delay time while the delay is running does produce pitch bent sounds rather than digital glitching.

In loop mode you get a basic delay to play with which can be recorded into the loop, or serve as a short additional loop which can keep running while the main one is stopped. You also get to control the volume of these two loops independently for some remix action.

Apart from the supplied wall wart there’s also an option to run on batteries; just as well, in the studio I found that using the psu introduced a bit of hum into the sound. (probably solvable, but I’ve used many other stomp boxes without problem). Sound quality otherwise is very good, with maybe a hint of digital harshness, and there’s an optional analog bypass which can be turned off (to give trailing echoes) by a special start up procedure.

Adding an expression pedal (Boss type) really gives an extra dimension allowing you to have the 5 knobs set for toe up and for toe down and morph between the 2 settings. Of course you can always just assign it to omething simple like loop volume, and indeed most of the time you won’t want some complex morphing arrangement, but the power is there when required and it’s easy enough to set up.

Build quality is excellent with a tough cast metal chassis, no known reliability issues so overall it’s a well thought out basic looper.

There’s also a rare rack mount version with 60s of loop time. All the DL4 features plus additional XLR in/out and midi control. …but note, while the delays sync to midi clock, the looper, rather inexplicably, does not.

Here is a review by Jeffrey L. Seltzer